Looking for some inspiration for your next challenge? Here are some stories from fundraisers who’ve run, trekked and pedalled the miles, raised the funds and proudly worn the Barnardo’s T-shirt. 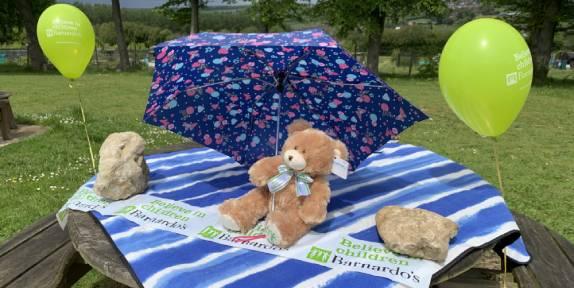 Event: Sponsored Run, as part of fundraising for the 2021 Virgin Money London Marathon

"My two boys attend a lovely village primary school and I had an idea to organise a sponsored run as part of my Barnardo’s marathon fund-raising. Once the Headteacher and I had confirmed a date for the sponsored run, I wrote a letter to parents to inform them about the event, and I also joined a school assembly through Zoom to tell the children all about it - it was wonderful to see how excited they were!

Each child went home from school that day with a Barnardo’s sponsor form. I also attached an envelope for them to return after the event, with the completed sponsor forms and any money raised. The sponsored run was held in the field next to the school, which I decorated with Barnardo's banners and balloons - the children were sponsored for how many laps of the field they could do in 30 minutes. A couple of classes came out at a time and I gave each child a little piece of card.  They ran with this card and each time they did a lap of the field I put a star sticker on their card. At the end they counted the stars to see how many laps they had completed, and then they then took this card home to show their parents and collect the money.

The final amount was the whopping great sum of £3,714! I had been hoping for around £600, so this was incredible, especially as it is just a small village school. Not only did this event raise lots of money, but I felt the children and the school also gained so much from the whole experience. The school also have a lovely Barnardo’s bear and a certificate to display to remember and celebrate all the money they raised!" 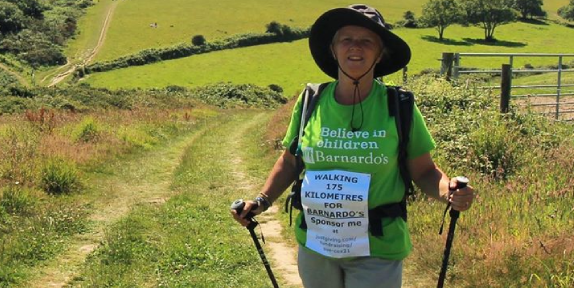 Sue decided to take part in a 175 Challenge to celebrate Thomas Barnardo's 175th Birthday at the beginning of July 2020. Sue is already a volunteer for Barnardo's but decided to challenge herself to walk 175km over 10 days. Sue completed her challenge and raised over £900 for Barnardo's in the process.

Sue said ‘Thomas Barnardo has always been one of my heroes because of his heart full of compassion and his passion to help destitute children.  Barnardo's as an organisation has the same basis and values I have in my own life.

My husband asked me if I would like to walk 17.5km for Thomas Barnardo's 175th birthday.  I knew I could do that in a day and then the idea of doing 17.5 km for 10 days and getting sponsorship came to fruition.  Even though I found some of the days very hard, I still enjoyed every day of the walk as it gave me the opportunity to talk to people about the incredible services Barnardo's runs for children young people and families.  On my Just Giving page updates I highlighted a service each day so that people became aware of the need to keep the services running.’ 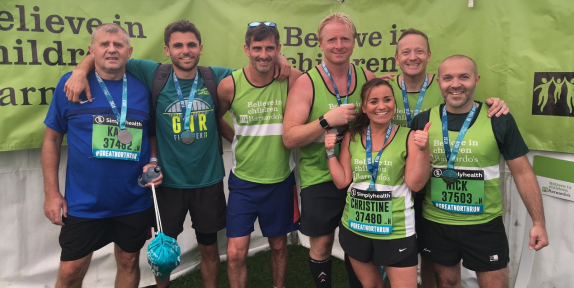 In 2019, one of our corporate partners, International Decorative Surfaces, decided to take on the 2019 Great North Run in support of Barnardo’s. Together as a team of over 20 staff members, they managed to raise over £8,000 for Barnardo’s.

Michael, who helped to put the team together, said;

‘International Decorative Surfaces are always looking at ways to support charities and with the Great North run taking place near to home for me I felt that it would be a great way to get people from other branches involved and raise a lot of money. The team that volunteered really helped each other out with messages of support and regular updates on how the sponsorship was going.  It was fantastic as we got closer to the event and saw the total get over the £8000 mark’.

An incredible effort - thank you so much to the team! 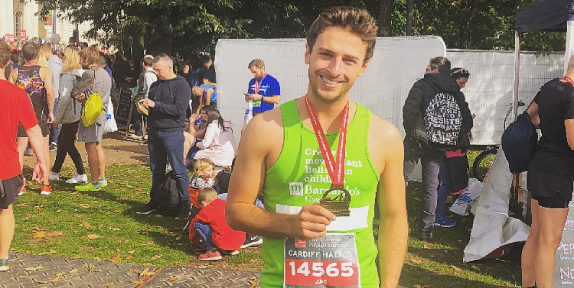 Jac ran the Cardiff Half Marathon for Barnardo’s raising over £600.

‘I chose Barnardo’s because of the fantastic work you do day in and day out. We need to do more to help young children in poverty and in need of our support, so I wanted to do something positive and healthy to raise money for a well-respected children’s charity and thought the Cardiff Half Marathon would be a great opportunity to raise more awareness and raise funds.

I had so much support from Barnardo’s throughout my training, on the day of the race and post-race. I would absolutely recommend and encourage others to raise funds for such a great cause.

I was very much overwhelmed with the generosity and support of my family & friends, with raising double my initial target I was so pleased that others were getting on board with helping me raise funds for an important charity.’ 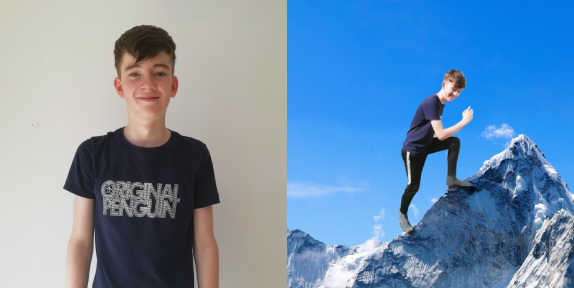 To keep himself busy while stuck at home 13 year old Frank decided to climb the height of Everest on his stairs. Over 7 days Frank climbed up and down 2 flights of stairs 1525 times to reach the 8,848 metre height of Everest.

“I really missed football training, matches and kick-a-bouts with my friends during lockdown. There's only so much xbox you can play, TV you can watch or books you can read.

I thought it'd be good to have a physical challenge that I could complete while raising some money to help others whose lives may be far harder than mine right now.” 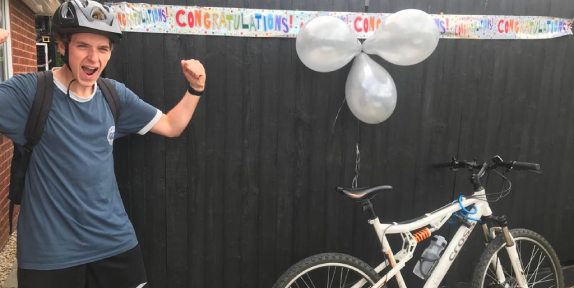 Trainee teacher Ryan set himself the challenge of cycling the equivalent distance of his home Aylesbury in Buckinghamshire to Paris a whopping 336.2 miles over a month! Although Ryan didn’t make it to Paris in person he entertained his friends and family with virtual updates and raised over £1,100 for Barnardo’s.

‘As a trainee teacher, I have already met and taught lots of vulnerable children, some who rely on the support of charities like Barnardo's to help them thrive daily and get the great childhood they deserve. Some children have starts to life which are unimaginable to those such as myself who have grown up in healthy loving homes and that simply isn't fair!’

Back to challenge events