Our Swindon Trailblazers Service have introduced an original and effective method to help children and young people.

But not just any game. The service has been using a game called Pesky gNATs. It’s specifically designed to help mental health professionals deliver therapy to young people and is part of their ongoing programme of blended approaches to tackling poor mental health.

You see, the service helps young people who are dealing with feelings of anxiety, worry, low mood and depression - something that was already high before the Covid-19 pandemic, and has only increased during it.

Pesky gNATs was designed by a not-for-profit organisation founded by David Coyle and Gary O’Reilly. They believe in transforming adolescent mental health interventions through technology. And they want to make it widely available.

With the help of Louise and Naomi, who are both Educational Mental Health Practitioners working at Swindon Trailblazers, we learned more about what the game is and just why it’s so effective.

So, how does the game work?

The purpose of the game is to teach children how to recognise and challenge Negative Automatic Thoughts (NATs). This is the scientific term for the niggling anxious thoughts that everyone gets when they’re worried or stressed.

In the game, these thoughts are represented by a series of flying gnats, which the player will encounter as they explore ‘gNATS Island’. There are many types of gnats (representing the many types of negative thoughts), like the ‘black and white thinking’ gnat or the ‘it’s a disaster’ gnat.

These gnats can sting the player, at which point the game prompts the young person to think about their own thoughts and experiences with this specific negative thought. They type this directly onto the screen via an in-game journal, which is saved for the next session.

This process teaches the player the principles of ‘cognitive restructuring’ - which means challenging those negative thoughts.

Who does the game help?

The game is suitable for any child aged between 9 and 17 who is experiencing some form of anxiety or low mood. This might be caused by specific past trauma, but increasingly is caused by what Louise calls a “generalised anxiety around the current state of the world”.

Louise and Naomi have noticed that the game is particularly popular with teenage boys, who normally aren't comfortable talking about thoughts and feelings.

Louise: “I have seen it work particularly well with 12-15 year old boys, as it seems to help them open up a bit more. Video games are what they are literate in, and what they know best - Pesky gNATs is a great way to engage with young people, and help them understand and cope with their feelings of anxiety and worry.”

Why is the game so good?

It’s based on science! Cognitive behavioral therapy does actually work.

First and foremost, the game is good because it’s so effective at helping children cope with feelings of worry and anxiety. It actually leads children to stop and think about the negative thoughts they are having, and to replace them with a more balanced alternative thought - a process officially known as ‘cognitive restructuring’.

Louise: “it’s an absolutely brilliant therapy tool, and everyone I have used it with has really benefited from it... The aim is not to remove worry altogether. It’s about them recognising these negative thoughts, realising that it isn’t the worst thing in the world, and appreciating that their brain isn’t always accurate and so they should question and think about what is causing these negative thoughts.”

Whilst it was designed with a purely therapeutic goal in mind, Pesky gNATs is no different from other video games: it's fun, and makes the counselling process engaging for young people.

Young people can create and name their avatar, are able to explore the tropical ‘gNAT island’, and can even meet characters like David Gnattenborough. And if they complete their in-game journal, they’re also rewarded with fun mini games.

It’s certainly not on the same level as the big games like Grand Theft Auto or Call of Duty - and there will be a degree of managing their expectations at first! - but Pesky gNATs provides a fun and engaging way for children to access these ideas.

No paper and pen

The alternative to the game is more traditional: pen, paper and exercise sheets. While some children do prefer this form of learning - and can choose it if they wish - being able to offer a gamified alternative has been invaluable for Louise and Naomi.

Unfortunately for Louise and Naomi, there is a certain stigma around talking about feelings and emotions. This means children and young people can be unwilling to talk about their negative feelings, which in turn can make it difficult for them to access the support they need. But Pesky gNATs has helped to completely change this, whilst at the same time offering a whole new way of approaching the topic.

Louise: “It removes the stigma around being mindful.”

Another interesting feature of the game is that each level incorporates a new mindfulness or breathing technique. We could all benefit from this, but for children who are anxious about the world - something Louise and Naomi have been noticing a lot of - the feature is vital.

Louise: “It gives them a more balanced outlook which, coupled with mindfulness and breathing work, teaches them how to calm their minds and bodies.” 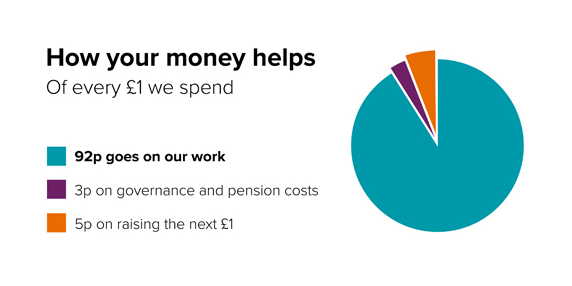 Of every £1 we spend, 92p goes on our work. 3p on governance and pension costs and 5p on raising the next £1. When Barnardo’s was founded 154 years ago, our vision was of a world where no child in need was turned away. In 2019-20 we supported work with 358,800 children, young people, parents and carers across the UK.