As children return to school this week a new survey by Barnardo’s reveals that many of them are worried about the start of the new term and the threat of bullying.

Today the charity launched a hard-hitting television advertising campaign on the themes of anxiety and bullying which highlights the importance of mental health support services for children and young people.

Among those backing the campaign is 15-year-old Casey-Jane Bishop from the Cynon Valley who struggles with severe anxiety but is now facing her fears to give young people like her a voice.

Casey-Jane is one of three young people elected to the Welsh Youth Parliament to represent Barnardo’s Cymru and, like the charity, has called on schools to do more to reduce bullying and promote young people’s mental health by offering them safe spaces where they can talk about their concerns.

A return to school survey of more than 1,000 eight to 15-year-olds carried out for Barnardo’s by YouGov showed that almost three in every 10 children worry about changing schools, class or teachers, and for 11-year-olds who are moving to secondary school this increases to more than half.

More than a third (35%) of children worry that someone they know might be bullied and that they won’t have anyone to talk to. More than half of eight-year-olds said their friends had experienced someone kicking or punching them.

Barnardo’s advert which is screened for the first time today uses the images of hyenas following a girl to school, circling her in the playground and appearing on her phone in her bedroom to convey anxiety.

Casey-Jane has been left suffering anxiety attacks which can strike at any time after years of being physically and mentally bullied, sometimes going home from school bruised and scratched.

“I’d describe anxiety as if my brain has a remote button that controls everything, I never know when it’s going to trigger or how bad it will be,” she said.

“I start shaking really badly, sometimes I start sweating and sometimes my speech becomes slurred. Since I’ve been receiving help I’ve learnt to understand my anxiety more and I can recognise the signs. It’s kind of normal for me now,” she said.

“I was physically bullied from Year 1 or 2 and had to move school. That was difficult because it also meant I had to leave all the children I had grown up with and my new school felt like a desert island. That was when the anxiety really kicked in for the first time. 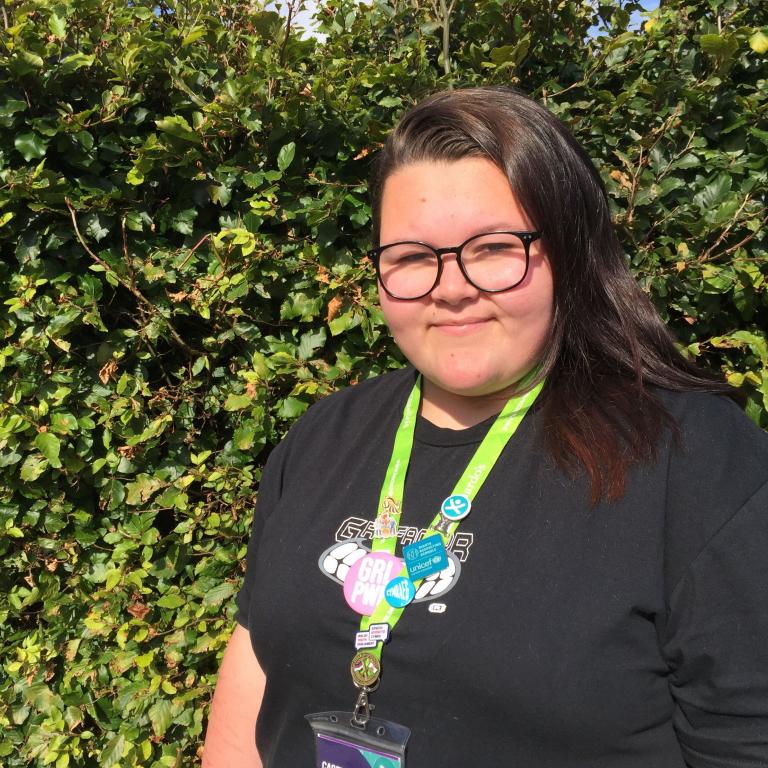 “I was always on edge and constantly looking around. I didn’t know it was anxiety until I reached crisis point. I was verbally and physically bullied at my second school, pushed around and bruised quite badly. It was a lot to deal with and I suffered from nightmares.”

Her mother spoke to the school and after that teachers stepped in to try to prevent further attacks and she was pleased to move up to secondary school in a new area away from the group who had bullied her.

But when her parents split up she found she was once again a target for bullies and it is only now as her peer group have turned their attentions to exams that things have settled down for her.

She has been helped through her darkest times by the Child and Adolescent Mental Health Service (CAHMS) and Barnardo’s Resilient Families project.

“My Barnardo’s worker visited me at home and was a great support. She taught me breathing exercises and how to cope with attacks. She was there to help me with anything and everything and I had so much fun looking forward to the future with her,” said Casey-Jane.

Both Barnardo’s and her CAHMS worker encouraged her to stand for the first Welsh Youth Parliament earlier this year and despite the anxieties of making her first speech she is really enjoying the experience and hopes politicians and others will listen to the parliament.

“People are starting to realise that young people have something to say and know what they are talking about. I want to raise awareness about young people’s mental health. Anxiety is a big thing for them and it can trigger physical symptoms too. Not many people talk about mental health but we need to.

“When I was at my worst I felt singled out and treated differently yet at the same time I felt no one could see me, it was weird. I was frightened and confused. Before I got help from Barnardo’s and CAHMS there were times when I didn’t want to keep going, I wanted to give up.

“There are a lot of other people in that place and it is important young people don’t feel they are on their own. For me the most immediate issues facing young people today are around their mental health and social wellbeing.”

Sarah Crawley, Director of Barnardo’s Cymru, said:  “It is so important that we all look out for and support children and young people with their mental health and wellbeing.

“Bullying and mental health issues don’t stop at the school gates. Any form of bullying whether it is mental, physical or through social media can lead to anxiety and fear. In Barnardo’s we provide schools-based counselling, family wellbeing services and individual support to children and young people suffering with these issues. With the right support from a trusted adult, children can recover from difficult experiences and work towards a positive future.”

Barnardo’s tips on how to help your child feel ready for the start of term and settle in.

Think about what could help them take on the day

It’s worth talking to your child about what makes them feel safe - what we sometimes call “putting our armour on”. This might be styling their hair in a way they like, having a conversation with a friend or family member, eating their favourite breakfast, doing power poses in the mirror or doing something fun the night before.

Reflect and celebrate at the end of the day

Consider what your child might want at the end of the day; it could be a chance to chat with you, seeing or speaking to a friend, having their favourite meal, or simply writing in a diary. Celebrating each day at a time is incredibly important.

Help them to speak up about their needs

If there are particular things your child would like their school/new teacher to know about them, but feel unable to tell them in person, you could work with them to create a ‘pupil passport’ to let their new teacher know. This can include useful information such as “I like it when I’m sat near the front of the room so I can see the door” or “I don’t like it when people stand too close to me”. This can be created with words, pictures or anything creative.

Reassure them they're not alone

It's completely normal for your child to feel worried and anxious about starting a new school or new year/term. It’s also important that your child knows that they can talk to you about this, so try to talk to them about how they feel about going back to school. If they’re comfortable to talk about it with others, you could suggest they speak to children who may be in a similar situation. That way, they can share their experiences and go through the school transition together.

Barnardo’s five things you need to know about anxiety

1.    Anxiety presents itself in different ways

Anxiety can look different from one person to another. There are immediate physical symptoms that might be recognised easily - like shaking, sweating and going red - but there can be other symptoms that aren’t obvious, like difficulty sleeping, restlessness and stomach aches that can come and go, racing thoughts, difficulty concentrating and wanting to withdraw from social situations.

2.    Children need help to identify their anxiety too

Some children can find it hard to identify thoughts (and distinguish them from feelings) altogether. However, it’s important to be aware of thoughts to be able to identify anxiety.

Anxious children tend to express their anxiety in their thoughts. They may jump to negative conclusions about situations. For example, if a parent is late coming home one day, they might worry that this is because there’s been an accident. Anxious children are also more likely to have negative thoughts about themselves and may think they’re not good enough, not well liked enough or bound to fail - which can lead to them avoiding certain situations. Getting them talking about their thoughts can help.

3.    Talking about anxiety can help

Communication is vital in getting to the root of a child’s anxiety. Gently asking the right questions can help them to find the thought that is troubling them. For example, if they suddenly show signs of being scared or worried, ask them to describe what they think might be happening to make them feel this way. Talking it through can help lead them to finding the thought at the root of the anxiety.

Once you’ve identified this, you can work together to discuss how helpful these thoughts are, or how likely a potential outcome might be.

Anxiety becomes an issue when it impacts a person frequently and when worries are difficult to manage, but anxiety itself is normal and common. Most adults will be able to recall a time or a situation which made them feel anxious. It might have been down to an exam, a ride on a rollercoaster or speaking in front of lots of people. It’s totally normal to experience it at some point in life. This is important to remember and can help children feel better about dealing with their own anxiety.

5.    There are ways to manage anxiety and anxious thoughts

Your child doesn’t need to feel they’re alone in trying to cope with anxiety. And it can be helpful to remind them that while anxiety can feel overwhelming and very uncomfortable at the time, it will pass and will not harm them.

EDITORS’ NOTES:
If you would like to arrange any interviews, or for further information, please contact Barnardo’s Cymru Media and Communications Manager Margaret O’Reilly on 029 2043 6229/07827 977830. The conference itself is not a public event but interviews can be arranged outside of the conference room.

Barnardo’s Cymru works with more than 8,000 individual young people and families in 94 specialised projects in local communities across Wales. This includes work with children affected by today’s most urgent issues: poverty, homelessness, disability, bereavement and abuse.

Thomas Barnardo’s vision was for no child to be turned away from the help they need. During its 150 year history the charity has helped transform the lives of millions of disadvantaged children in the UK, and continues to help families build better futures. Last year 301,100 children, young people and families were supported by Barnardo’s through more than 1,000 services across the UK, including young carers, care leavers, foster carers and adoptive parents, training and skills and parenting classes. Visit www.barnardos.org.uk to find out more. Follow Barnardo’s media team on Twitter @BarnardosNews.